You may notice the new “Listen” option on the blog entries – this is because I’ve just signed up with Talkr which converts (via a computer) my blog entries to audio so you can now listen to my blog on your iPod or similar if you wanted to.

Listen to ANY blog

Talkr: Letting blogs speak for themselves.

Hope it comes in handy!

Sorry for not blogging much

Meh – sorry my blogging rate has decreased quite dramatically the last two weeks: a combination of workload, tiredness and problems with the Mozilla Firefox browser have prevented me from blogging when I wanted to.

What problem with Firefox? Well, I rebooted and then Firefox wouldn’t stay open for more than 2 pages at a time without crashing (sometimes it wouldn’t even load without crashing). Tried loading Firefox in safe mode (with extensions disabled) and same problem. So how did I fix it? Basically, I somehow managed to track it down to an update with Real Player pushed out via Google Updater which had a dodgy Firefox/RealPlayer integration which caused Firefox to die. Uninstall Real Player and it worked perfectly.

Only problem I have had to date with Google Updater though.

My other half has got me watching Ugly Betty, but so that I can catch up with the episodes I’ve been watching pre-recorded episodes. I’ve just finished watching Episode 7 which according to the DVD player was 42 minutes long: however, the same episode on the UK TV schedules with advertisements takes up a 55 minute slot – that’s 13 minutes of advertisements!

It’s only a bit better then the US version where the show takes up a 60 minute broadcast slot – providing 18 minutes of adverts: that’s more than a quarter of the “show time” being ads.

This is one reason why I like the BBC (no adverts) and pre-recorded shows.

Puzzle: Who Owns The Fish

We were recently given the following puzzle at work (for some unknown reason) and were told the record for solving it as far as our boss knew was 4 hours – some people have spent days and months over it and some people aren’t able to solve it at all! I managed around 2.5 hours 😀

Allegedly set by Albert Einstein who said the 98% of the world could not solve it, you’ve just to got simply work out who owns the pet fish.

The following facts are known:

You also know the following “hints” or clues:

Poll: Which Ancient Language Are You Test

Via Les I took the “Which Ancient Language Are You Test” and my results were: 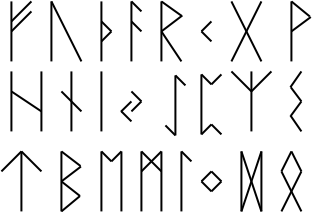 Language of the Norse, Older Futhark! Thirty symbols, all told. And no hardier, more warrior-like tongue has ever graced the longships of the Viki or left the Celts and Saxons in such quivering fear. There’s only one drawback, that being you died 800 years ago.

The Which Ancient Language Are You Test written by imipak on OkCupid Free Online Dating, home of the The Dating Persona Test

The test tracked 4 variables and I scored “over 99%” on Ideogramatic, Syllablic, Logogramic and Alphabetic “compared to other people my age/gender”.