Who was in Victoria Wood with all the Trimmings

After watching “Victoria Wood with all the Trimmings” last night, I wondered how many actors had been in Doctor Who, Eastenders and Coronation Street (three extremely popular UK TV shows) and therefore, being the geek I am, decided to find out.

Is it really non-commercial “piracy” “killing” the movie industry, or is it due to things like this which I saw in Sainsbury’s a month ago. 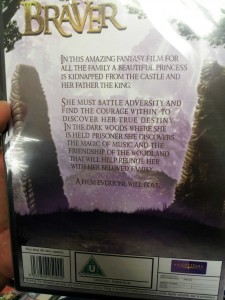 Yep, Disney/Pixar’s “Brave” has only very recently gone in the cinema, yet “Brightspark” has “Braver” out about the “Bravest Princess in all time”..

After my May 2005 blog post about a Jaffa Cake song, I’m overjoyed to say that “Jo” has found a YouTube copy:

Doctor Who: The Musical

Thanks to Les at Stupid Evil Bastard (who got it from ***Dave), here’s Doctor Who the musical:

END_OF_DOCUMENT_TOKEN_TO_BE_REPLACED

TV: BBC Apologies for Graham Norton IPP in Doctor Who

Last night, myself and many others had our experience of Doctor Who interrupted due to an “In-Programme Promotion” for Graham Norton’s “Over The Rainbow” which followed Doctor Who. The BBC has, via their news site, released an apology headed “Doctor Who fans angered by trailer for Over the Rainbow” which said:

Thousands of Doctor Who fans have contacted the BBC to complain that the ending of Saturday night’s episode was ruined by a trailer for the next show.

The on-screen caption featured an animated cartoon of presenter Graham Norton, host of Over the Rainbow.

It appeared as The Doctor, played by Matt Smith, was making an emotional speech during the story’s cliffhanger ending for The Time of Angels.

The trailer was seen by millions of viewers watching on BBC One in England.

Fans have also been complaining on social networking site Twitter. One wrote: “Why is the BBC treating its audience like idiots?”

Another said: “Don’t blink or Graham Norton will catch you.”

The BBC often promotes programmes in this way but the corporation has acknowledged that in this case the scheduling was inappropriate.

A BBC spokesman said: “We apologise for the timing of Saturday night’s trail.”

When I sent in my complaint regarding this matter, I did ask for the BBC to contact me regarding this matter, but I still haven’t received even an acknowledgement from them. This is the first time I have seen an IPP on the BBC – I know I don’t watch a lot of TV now, but I’m sure I would have seen them before now if they “often promote[d] programmes in this way”…